Intense orange afterglow in sky at sunset. Glassy luminous blue and viridian green on the water surface.  Shades of blue from midnight blue to pale blue light the overlapping bluffs on the river edge.

You might want to know: Poet Paul Martin requested the use of this painting as a cover for his poetry book Floating on the Lehigh. Soon after it was published, Garrison Keillor read Martin’s poem ‘The First Voyages Out’ from Floating on the Lehigh on Writer’s Almanac. Its at the end of the 5 minute audio piece.

Paul Martin was Winner of the 2015 Grayson Books Chapbook Competition.
I love what fellow poet John Stanizzi said about Martin’s poems in this book, and I hope my painting embodied these sentiments as well.
“Each poem in Floating on the Lehigh is buoyant and clear, a powerfully understated, beautifully written commemoration of the might and magnificence of nature and our tenuous, fickle, irresistible relationship with it.   Every poem is a small stone over which the rivers of clarity and intelligence flow gracefully.”
—John Stanizzi

“Aspinwall” a painting of the rooftops of Aspinwall from Route 28 is the original painting by Carol Skinger. It is a watercolor, gouache & ink painted a full sheet of  400 lb watercolor paper.

What’s in the painting?

At far left in the painting the chateaux style yellow brick building is on Maple Avenue  It is a former convent of Saint Scholastica Church in Aspinwall built in 1925. The architect of the former convent Edward J. Weber was a native of Cincinnati who studied architecture at the Ecole des Beaux-Arts in Paris and traveled throughout Europe. He came to practice in Pittsburgh, where he had a number of Roman Catholic commissions, of which this convent was one. Weber clearly loved the medieval period, even writing in 1927 that this was when, “art was at its best.” In this convent, he seems to have been inspired by the 15th century Château du Moulin in the Loire valley, which clearly was the inspiration for Central Catholic High School in Oakland. Information on the architect is thanks to historian Frank Kurtik, Docent at Heinz Memorial Chapel and a former Heinz family archivist. Very near it is Christ the Divine Teacher Catholic Academy (formerly called St. Scholastica School), and Saint Scholastica Church.

The red brick church sitting more or less in the center of the painting is the Aspinwall Presbyterian Church. Everything but the church’s tower burned down in 1999 and was rebuilt immediately. The new sanctuary a KSBA Architects design, has a wood-beamed ceiling and interior cross plan with a wide center aisle and holds a 40 pipe Luley type organ. Four large Hunt Studio designed stained glass circular windows illuminate the sanctuary.

Brilliant Railroad Bridge a truss bridge spanning the Allegheny River beyond, was built in 1904 by the Pennsylvania Railroad as part of a bypass of the narrow tracks around downtown Pittsburgh. The rail line has been out of use since the Azcon Metals scrapyard on the outskirts of Aspinwall ceased functions around 2010. It connects Aspinwall with Highland Park. On the Aspinwall side it lands at the Aspinwall Riverfront Park and at the other end is very near Choderwood, a house was built by the Corps of Engineers in 1905. The property is a unique private residence that sits on the Allegheny River at the Highland Park Dam. Choderwood is an “ideal space for individuals planning smaller scale events and gatherings. Perfect for intimate weddings, rehearsal dinners, bridal showers, family reunions, special events, birthday parties, corporate retreats, or relaxation.”

D.J. Bryant, a designer at AE7 Planners and Architects, proposed a bike and pedestrian use for the Brilliant Railroad Bridge an ambitious new idea—the Brilliant Branch Rail-to-Trail—in a July 2017 Next Pittsburgh article. It would increase connectivity and access to safe, affordable transportation options for several communities in the city. I hope this becomes a reality. Cycling Across the Allegheny River, Watercolor and Gouache by Carol Skinger to be auctioned this coming Friday Dec. 7, 2018 Art of Cycling, A Benefit for Bike MS at the Wigle Distillery in the Strip District Pittsburgh MS fundraiser between 6:00 PM – 9:00 PM. Wigle Whiskey Distillery 2401 Smallman St, Pittsburgh, Pennsylvania 15222. Proceeds benefit the National MS Society, PA Keystone Chapter & Bike MS. Join us for cycling-themed cocktails, Blue Sparrow Food Truck and an auction of cycling-themed artwork by Pittsburgh artists including two paintings by me. They will be unveiling and auctioning the first-ever Wigle Whiskey cycling jersey, produced locally by Aero Tech Designs. Between now and then my two Art of Cycling paintings are on display with 2 others (one by Baron Batch) at Kindred Cycles, 2515 Penn Avenue in the Strip District. I like the idea of plein air painting, I really do but I don’t like doing it, at least it seems that way. Where would I go to the bathroom if I stood out on the bridge to paint this? Would I  dump a few gallons of water from cleaning my brushes over the side? Even if that was OK and its not, there is a chain link fence. The amount of stuff I would schlep is not appealing but it happens sometimes and I have been known to say I  like plein air painting, and in truth there ARE moments when I like it, but mostly I like the idea of it. Though working on site is good for sketching I rarely take a painting all the way through at the site.

People ask if I use photos when I create a painting. I very often do. Here are a few I took  to visualize a composition for this painting.  I see this view so often when driving over the bridge I wanted to paint it. There is a sidewalk on the bridge and I recommend walking it to slow down the view you see when driving.

Some of the many pictures I took to help visualize this scene: I walk out on the bridge and do a quick sketch and take a bunch of pictures. Then I put together my ideas indoors, where there is a sink, a bathroom, heat and air conditioning. Oh and a computer where I look at my photographs. So no. I am not much of a plein air painter. Not often anyway. I even take pictures of my painting while I am painting it and seeing them on a big screen helps me know what to do next. Pathetic words for a real plein air painter!

What you can see in this  painting looking downriver from Highland Park Bridge:

Lock No.  2 on left at foot of Morningside . The bridge you see is the 62nd Street Bridge. The first neighborhood on the right is Sharpsburg and the docks and island nearest you are where, in 2015 you can rent a pontoon boat at Sharpsburg Islands Marina. The water tower is in Sharpsburg. A new plan is underway to develop a wonderful waterfront park.  It is  the vision of Susan and Currie Crookston.  The Crookstons generated community support from the three municipalities the property runs through, Sharpsburg, O’hara and Aspinwall. The new  Aspinwall Riverfront Park which you cannot see in this view.  It is on the right and it is just on the upriver side of Highland Park Bridge. On Garrison Keillor’s radio broadcast  The Writer’s Almanac on August 20, 2015 he read from Paul Martin’s most recent book of poetry Floating on the Lehigh published by Grayson Books where my Riverview painting was commissioned for the cover. It is Garrison Keillor’s daily summary of poems, prose, and literary history. The publishing process? The poet himself searched images of paintings of rivers online arriving at my  website where  paintings of the Allegheny River are housed. Martin contacted me directly and made the introduction to his publisher Grayson Books who commissioned the use of the river painting he especially loved for the cover.

Contact me about licensing or commissioning one time use of my images. 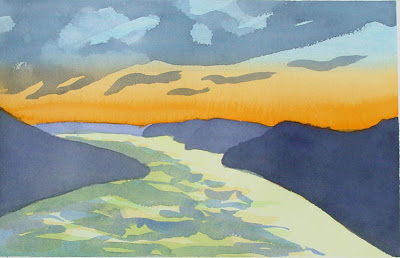 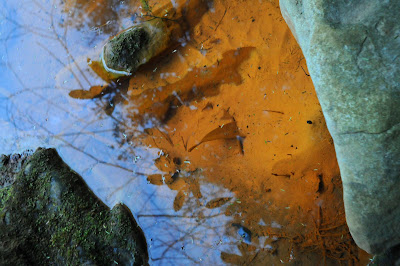 It’s mostly local food and great local chefs (yeah) at Rachel’s Sustainable Feast but there will also be something for the eye and the environmental mind!

On Sunday May 24th, 2009 Artist Carol Skinger and photographer Aaron McGregor are taking a tent at Rachel’s Sustainable Feast to show their own art work inspired by the Allegheny River watershed.

Carol’s landscape paintings of the Allegheny River Valley shown with Aaron’s close up photographs of the environmental effects from mining in the region, make a dual visual statement of the environment where Rachel Carson grew up. We are hoping that attendees and supporters of local sustainable small agriculture will make the leap and consider supporting/sustaining or at the very least appreciating the careers home grown artists! 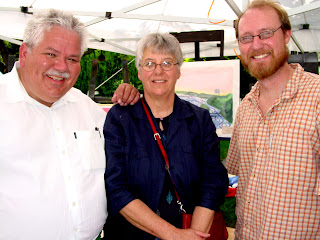 Rick Sebek, Carol Skinger, Aaron McGregor
Rick was there with his film crew doing a documentary about the rivers near Pittsburgh! Exciting! 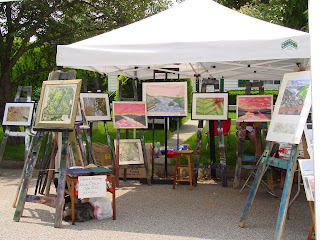 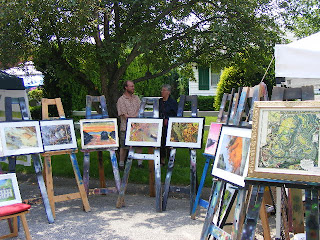 But then a massive deluge happened before he came down to our side
so we missed our 15 minutes of fame!
Carol Skinger’s website and shop
Share: